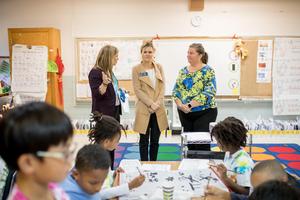 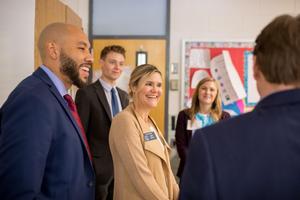 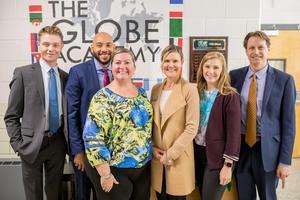 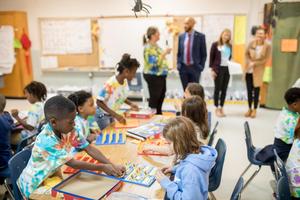 The GLOBE Academy welcomed Georgia State Senator Elena Parent to its lower campus on Friday, Nov. 1 for an introduction to the dual language immersion school and to chat about charter schools with GLOBE staff.

Sen. Parent, a member of the Education and Youth, Judiciary and Special Judiciary committees, serves as secretary for the Government Oversight Committee, the deputy whip for the Minority Caucus, vice chair of the Senate DeKalb Delegation and vice chair of the Working Families Legislative Caucus. She toured the Heritage Drive campus which houses the Academy’s Kindergarten through Third grades, and got a peek into Second grade classes learning and speaking Mandarin.

Megan Brown, Admissions Director, said the school was excited to share all that is being accomplished through dual language immersion at GLOBE.

“Our hope was that Sen. Parent would walk away with a clear understanding of how effective charter schools are,” she said. “We are not a neighborhood school; we have students who come from all over DeKalb county so, we really are servicing a large population. And as a language immersion school, we hope to service populations of students who may be growing up in a households whose heritage language is one of our target languages. We want to make sure that those populations know that we’re here … Because what’s going to happen is those students are not just going to become fluent in English, they’re going to be biliterate. Our students' lives are truly being changed.”

According to a recent article in the Atlanta Journal Constitution, a comprehensive study published two years ago by the Rand Corporation found compelling causal evidence that dual language immersion programs improve students' reading skills in English while also building their skills in another language.

“It was a pleasure to host Sen. Parent at the GLOBE Academy to show the amazing program we have here at GLOBE,” added Christi Elliott-Earby, Executive Director of The GLOBE Academy.

“My hope is that Sen. Parent has a deeper understanding of charter schools and is able to share that knowledge with her peers when topics of charter funding and resources come up within the Senate. But, specifically I want her to know that our school with the DLI model is changing brains through instructing in another language as well as bring down barriers with other cultures.”